An evening of stories, music, laughter, and tears.

In this very funny, and often very moving show, Marty takes you from meeting Barry Manilow at the CBS Mailroom in New York … all the way up to their current Top 10 Hit … “Talk to Me.”

Along the way, you’ll hear about the Miracle of Bette Midler at the Continental Baths … and helping Judy Garland with her return to The Palace.

Stories about writing lyrics with “hooks,” for Julio Iglesias, and writing jingles for crooks (he’ll tell you at the show).

Follow Marty on his explosive career … from his first “important” song, to his first important hit.

Hear how he competed to replace Paul McCartney on a commercial … and how he completed his most successful song … in 10 minutes.

Travel with him through Disney’s Magic Kingdom, and hear Simba and Pocahontas, sing Marty’s first songs for animation.

Share his unforgettable session with Kenny Rogers … his five hilarious years with, Julio Iglesias … and his unbridled joy, at realizing the Disney Princesses, don’t write their own songs …

You’ll be surprised and touched, when he speaks of his meeting Don Grady, and the depth of their friendship, and collaboration … and by his memories of his mother … that inspire and inform, every song he writes.

Bring someone whose hand you can hold, during the love songs … someone to dance alongside, when “It’s A Miracle” and “New York City Rhythm” have you on your feet … and someone to drive you home, if you’re still laughing so hard, you can’t steer the car.

And … of course, you’ll hear about all the amazing, life-changing moments he’s shared, with the most important person in his career, and in his heart … Barry Manilow. 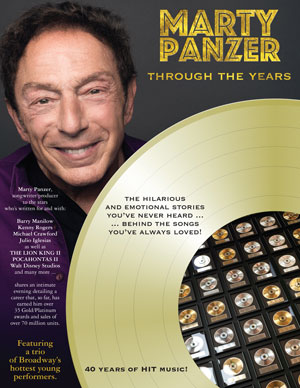 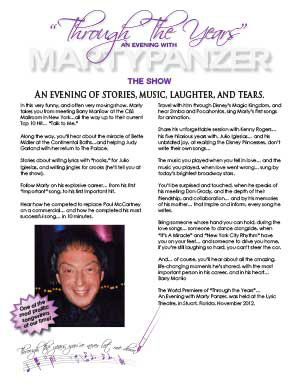 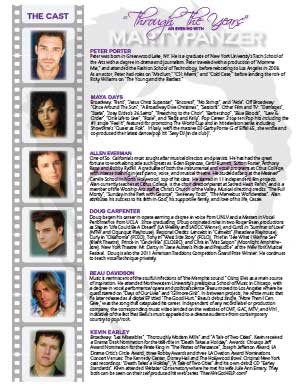